When Hyunsin encountered dance, she was quite relieved to no longer be limited to the representation of the female Asian stereotypes, quite common in theater and film. She soon realized, however, that the international dance scene had its own mechanisms of exoticizing of “the other”.

The Western pioneers of dance dived into the “Far East” at the beginning of the 20th century. The “foreign”, with its aspects of beauty, naturalness, authenticity and erotic became the inspiration for the “new” dance which appeared afterwards. Ted Shawn became Shiva, Mary Wigman a witch. Although the fascination of the other is no longer primarily expressed through impersonation and representation anymore, its attraction somehow continues to persist. Hyunsin now asks the naïve question: Can stereotypes exist beyond mere parody and reproduction? Could there be a way to turn them into means of empowerment? Together with live music by Baly Nguyen, Hyunsin delves into these clichés. 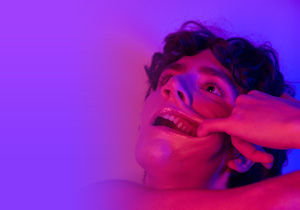 WAH WAH WAH A solo show from Canada about reclaiming the right to wail - July 19, 20, 21sh