A young queer person grapples with the messiness of (MAYBE) being violated. 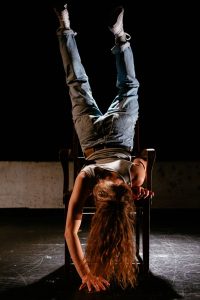 Wah Wah Wah follows one person’s muddled account of a very specific, yet familiar story. A gaze held too long, being followed down the street, a stranger’s hand on your bare thigh — the layers are peeled back, revealing a tangled inner dialogue surrounding instances of violation. What happens if I love it and hate it at the same time? Did anything even happen? Is anything ever gonna change?

Wah Wah Wah is a new and explosive performance work from Canada that dissects micro-moments of sexual harassment from a queer perspective using storytelling, tantrums, and visceral movement when words arent enough.

is a queer and trans non-binary performer, performance creator, and choreographer. Their growth and learning has been greatly shaped by trainings and opportunities at The Paprika Festival, the AMY Project, La Pocha Nostra and the P.A.R.T.S summerschool for contemporary dance. Recently, Celia was involved as a choreographer in adelheid dance’s re:research program, and was a guest choreographer at Toronto Dance Theatre’s for their Pilot Episodes project. Celia is a recipient of the Theatre Centre Emerging Artist Award, and is also a birthworker. They are currently developing SOWWY, a new ensemble performance work that explores men, gender and apology.

is a queer, trans-feminine, Muslim playwright, director, performer and workshop facilitator. Bilal’s first play, Acha Bacha, had its world premiere in 2018 and has been published by Playwrights Canada Press. Other written work in development includes Kainchee Lagaa, Kitne Saare Laloo Yahan Pey Hain, and I want that free mind! As a director/dramaturg, Bilal has worked on projects such as Wah Wah Wah (SummerWorks 2019), Eraser (RISER Project 2019), and The Trans Gemmes (Rhubarb Festival 2019-2020).

Wah Wah Wah was first presented at the 2019 SummerWorks Festival. For that presentation, Amy Nostbakken was the movement consultant and outside eye.

Presented in association with Pencil Kit Productions and Nightwood Theatre

Supported by the Lindy Green Family Charitable Foundation, Factory Theatre, Why Not Theatre, and The SummerWorks Festival