An immersive binaural experience developed from the play The White Plague (created in 2017 and performed in UK and Greece) as a response to the health & safety restrictions imposed in theaters during COVID19.

10 years have passed since a fiercely contagious virus spread among a major city’s population, causing a mysterious white blindness and eventually, society’s collapse. Now five survivors come forward to tell a story they were not allowed to share before. A story of unprepared quarantine facilities and dehumanizing circumstances that drive citizens to expose the very brightest and darkest aspects of their human nature. A story of government negligence, police violence and persevering humanity.

This binaural experience places the audience in the middle of the action as a state-of-the-art sound design transports them to every location of the play and inside every character’s head. A starting point to explore social coherence, gender roles and the survival instincts of a society in crisis. 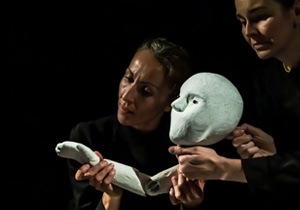