The 2020 Expo: A Showcase of Wahlberliner›Previous production ›

Dear audience, due to the present circumstances, we have decided to postpone YOU-ME-HUMAN-TREE until later in the year.

We will release new performance dates as soon as we can and re-release ticket sales. Purchased tickets for the May dates will be accepted for rescheduled performances!

But for now, please stay healthy and at home.  We look forward to sharing this work with you in the future!

A performance co-created by humans and trees of all different ages, experiences and backgrounds

Together, we are celebrating interconnectedness through interspecies storytelling that crosses time and space. 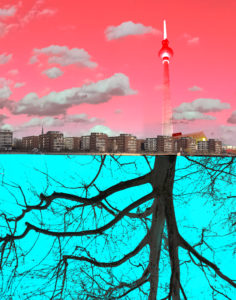 In February of 2020, English Theatre Berlin | International Performing Arts Center began a community theater project open to people of all ages. Our initial question was simple: if trees could talk, what would they say? This led us on a journey of collaboration, experimentation and contemplation. Together we walked in Tegel forest, shared memories of trees, delved into mythology and the news, discussed evolution with a scientist and observed the trees in Kreuzberg.

A unique and exciting performance has grown from the seeds of play and curiosity: YOU-ME-HUMAN-TREE was devised by an intergenerational ensemble of over 20 people and contains elements of physical theater, music, storytelling, puppetry, dance, burlesque, poetry and performance art.

The project team is deeply grateful to their project partners exploratorium berlin and die gelbe Villa for their input and support and would like to give special thanks to Professor Kurt Zoglauer of Humboldt University for kindly giving us his time.

The project was funded by Jugend- und Familienstiftung des Landes Berlin and by Kreuzberger Kinderstiftung.