‹Me, myself & you in cyberspace‹ Next production
Kill the Dog›Previous production › 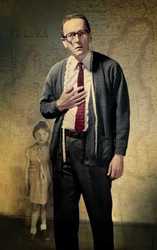 A story of journeys, of how a boy who grew up on a farm in Galicia, Poland, came to be a tailor in Inverness. His life spanned most of the 20th century. His story is not straightforward.

He was taken prisoner by the Soviets in 1939 and forced to work east of the Urals, then freed in an amnesty after the German invasion of the Soviet Union in 1941. He then joined the thousands of Poles who travelled to Tehran, then Egypt, to be integrated into the British Army, fighting in North Africa and Italy. He was then resettled in Britain in 1948, joining his brother in Glasgow. This is the story he told.

But there is another story, and perhaps a third and fourth one, for in order to survive, he had to adopt different identities. Like all immigrants, the tailor had to adapt and he did that very successfully, integrating himself into the fabric of Highland life. And fabric was perhaps the most important medium through which he achieved this. He made a variety of clothes for thousands of people, including himself, constructing the outward trappings which play a part in defining hwo we are. Fabric. Fabrication.

Crossing the borders from Poland to Russia to Iran to Egypt to Italy to Germany to Scotland, the fable reflects on the Second World War but is personal, intimate and rooted in two cultures: Galicia and the Scottish Highlands. The play uses the central metaphor of the tailor and his fabric. Layers of ghostly clothes are projected on to with a series of still and moving images from the tailor’s past and present-day Ukraine. The performance combines storytelling, songs, poetry and physicality with a rich soundscape of live fiddle music and effects.

The Tailor of Inverness previewed at the Arches Theatre, Glasgow on July 29, 2008 and opened at the Assembly Rooms, Edinburgh on July 31, 2008. In the meantime the production toured the globe. Most of the production’s numerous performances to date have been sold out.

written and performed by Matthew Zajac