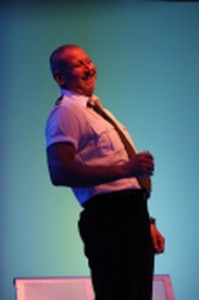 More than a dozen characters are weaving their way into each other over the course of a series of meaningful departures, layovers or arrivals. In these slices of destiny we travel from suspicion to attraction, fear to trust, alienation to connection and stress to love.

The One Act Plays:

Where I Come From by Daniel Reitz : En route young Shay finds herself confronted with the hard facts of her destination by the radical demonstration of a fellow traveller. Image

Storks by Catherine Filloux : An unnerved grandmother finds an unexpected communion with her estranged granddaughter in the course of a layover.

Haere Mai Ki Aotearoa by Julie McKee : Expat New Yorker Fiona returns to her native New Zealand and rather faces the audience than her family waiting outside the gate.

Terminal Connection by Ari Roth (Directed by Peter Romero) : Two arrivals strive to continue an intimate inflight moment at the terminal where they part after finding new direction in a bittersweet meeting.

The Airport Play by Alexandra Gersten-Vassilaros : a distressed woman finds enlightenment in the form of a mercilessly nosy stranger who helps to mend two broken hearts, his and hers.

The Flight of the Last Calhoon by Quincy Long : Gosts of the past are challenged and transformed by a desperate passenger with the help of two very curious security personnel.

The chorus figure of a grounded Air Captain joins all six plays.

with 4 additional performances until Sept 18, 2011

Original music, all arrangements and sound design by Neven Dayvid and Thomas Tichai