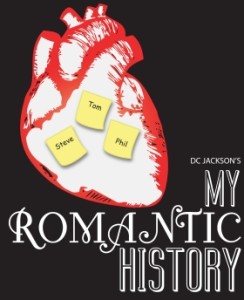 “I suppose there comes a point when you have to face that you’re just ‘that age’ and that if you’ve got a man who isn’t a retard, a rapist or a Rangers supporter then he’s probably about the best you’re going to get.”

My Romantic History takes a sharp, hilarious and affectionate look at modern relationships and the rocky road to true love. Office colleagues Tom and Amy´s drunken one-night stand seems to be morphing into a full-blown relationship before their very eyes, but before they can face the future, they’ll have to deal with the ghosts of relationships past…

“The genius of this play is that it acknowledges the ambivalence of postmodern sexual lives – the lack of commitment, the coldness, the sense that reality never quite measures up to some plastic ideal – while simultaneously overcoming all that with the wit, the humanity, the ability to laugh, learn, and move on, that is the real redeeming quality of our species. Jackson’s clear-eyed but brilliant comic invention is a joy, as is his inimitable way with words.” The Scotsman 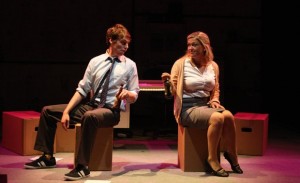 First produced by The Bush Theatre and Sheffield Theatres in association with Birmingham Repertory Theatre on 5th August 2010 at the Traverse Theatre Edinburgh.

D. C. JACKSON is a Glasgow-based writer. His plays include The Wall (2008), The Ducky (2009) and The Chooky Brae (2010), a trilogy of plays written for Borderline Theatre, Glasgow); Company Policy (2010), Out on the Wing (2008), Matinee Idle (2006) and Drawing Bored (2006), all for the A Play, A Pie and A Pint series at Oran Mor, Glasgow. He has written for BBC Radio Scotland and Radio 4. He is currently under commission to the Royal Court Theatre and the National Theatre of Scotland.

with 12 additional performances until Sept 2, 2011