How can peace ever be out of fashion?

The pacifists have been silenced by ISIS on the march, images of beheadings. But there have always been those fighting for peace, in their tiny cells, scattered across democracies around the world. Even when military aggression seems to be the popular answer to the ills of the world, they carry on believing in an alternative reality.

Peace, a very dark comedy by Lydia Stryk, is set in the meeting room of a peace group at the dawn of the Drone Wars. The play asks what exactly is peace? Can it be willed into existence? In ourselves? With those closest to us, let alone, in the world?

“As the Iraq war escalated, I began receiving almost daily emails from a peace group in a sizeable college town. I was struck by the group’s impassioned steadfastness and the enormous commitment of time and energy their constant activities implied. They never let up (and still haven’t). I began to wonder how they carried on, not giving in to despair or cynicism. I had the feeling I might write about a group like them one day, to cheer myself up, to inspire, let’s say, hope. That day came one summer, over a decade into the demoralizing war on terror. But the way the play evolved surprised me. These were not necessarily the characters I had in mind! This was not the way the story should unfold! The peace group battling inside me had taken on its own life. But the play is dedicated, with thanks, to those who go on, regardless of the odds, for the sake of peace.”     – Lydia Stryk

With the scenic presentation of Peace we continue our collaboration with Berlin-based U.S. playwright Lydia Stryk. 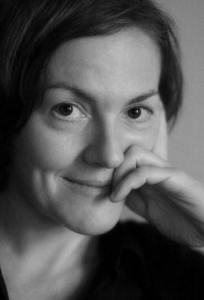 Lydia Stryk was born in DeKalb, Illinois, birthplace of barbed wire and is now based in Berlin. She is the author of over a dozen full-length plays including Monte Carlo, The House of Lily, The Glamour House, American Tet and An Accident, which have been part of festivals around the United States and produced at, among others, Denver Center Theatre, Steppenwolf Theatre (Chicago), Victory Gardens (Chicago), 7 Stages Theater (Atlanta), The Contemporary American Theatre Festival (Sheperdstown, West Virginia), Magic Theatre (San Francisco), and in Germany at Schauspiel Essen, Theaterhaus Stuttgart and English Theatre Berlin and featured at Biennale Bonn.  Lydia Stryk´s plays are published by Broadway Play Publishing and Dramatists Play Service and translated into German by Per Lauke Verlag, Hamburg. She has been commissioned by Pittsburgh Public Theatre and Geva Theatre, Rochester and is the recipient of a Berrilla Kerr Playwright Award and the 2010 Rella Lossy Playwriting Award.