A Conversation with a Cultural Icon 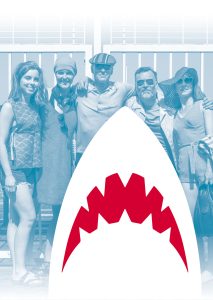 Jaws / Der Weisse Hai captures the aura of a turning point in history – the mid 1970s – and transforms the film’s images, its music, its evocative qualities into a long overdue conversation with a cultural icon. By examining the (then) critical content and (dwindling) relevance of Steven Spielberg’s 1975 movie Jaws we’re dancing and performing an entertaining and critical new look at this mega blockbuster (in fact, the first one of the so called “blockbuster era” of Hollywood movies).

In 1975, the white shark had to serve as a powerful metaphor, and the film’s worldwide mega-success led to decades of demonization of an animal species. But while the sensational success of Spielberg’s film conveys an image of the species Great White Shark that has long been untenable, it also opened up a new view of the relationship between man and animal, a view of the impending ecological catastrophe.

“It gets all psychological: You yell ‘barracuda!’ Everyone’s just ‘Ha?’. You yell ‘shark!!’ We got a panic on our hands on the Fourth of July” 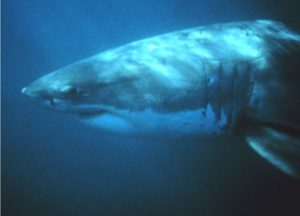 Spielberg’s Jaws is a striking example of a cultural turning point: Just when the so-called counterculture seemed to finally dominate, preparations for a new era began. The names Thatcher, Reagan and Kohl and the economic terms neoliberalism, deregulation and privatization brought traditional values back to the fore and countered the ideas of counterculture. After ten years of youthful optimism, but also mistrust, defeat and fear – Nixon and Watergate; defeat in the Vietnam War, the oil crisis and economic decline – Jaws showed a society banding together in the face of a grave threat, recalling its old values and again producing heroes from its midst.

At the same time, the first voices were raised warning of an ecological catastrophe, of global warming and a major threat to the entire planet. In 1972, the Club of Rome´s famous report, The Limits of Growth, painted an early picture of the disastrous future of planet Earth. Today, overfishing of the oceans and species extinction also threaten the shark populations of our planet – and The Great White is no longer suitable as an animal metaphor for human greed and violence.

Jaws is a movie about a fish, a threat and a hunt. The fish is a giant Great White Shark that appears off a town on the East Coast of the United States. It kills several swimmers and becomes a threat to the summer season of the seaside town, which depends entirely on tourism. An adventurer, a policeman and a scientist pursue the fish in a boat and, after a losing battle, bring it down – the boat sinks, leaving the adventurer and the fish to die.

Concept and Direction by Günther Grosser