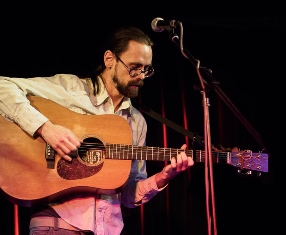 Jamie Collier’s writing style stems from country and blues, with influences from Tom Waits to Gillian Welch. A sensitive acoustic guitar technique, strong melody and a powerful singing voice form the backbone to a captivating performance of storytelling in song. From New Zealand, his musical journey of 9 entirely DIY albums has led him to hold a respectable stance in the craft of songwriting.

Jamie arrived in Berlin in the Winter of 2012, where he entered the Berlin scene, as so many musicians have, busking on the streets and passing the hat in the bars around the city. He co-founded the folk/synth-pop duo The Rad Dads later that year and kick started a mobile recording service to record Berlin’s musicians. Jamie will be joined by some fellow musicians for a memorable evening of songs. 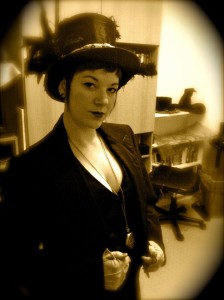 The Clockwork Faerie is the project of Berlin-based Johanna Blackstone. It is Clockpunk & Opera Strange. “To tell a story… That is the meaning of my song. The story of forever… Ticking on and on and on…” The Inventor! (Johanna Blackstone), sings with a pure tone voice that seems like a siren over water, playing a resonator ukulele that couldn’t be more fitting. Occasionally accompanied by The Engineer! (Gerrit Haasler), her songs weave together to tell a story of the Assemblage of The Clockwork Faerie.

She will be joined, in part, by The Harlequina (contact juggling) and The BellyBot (Belly Dancer) to present the ‘Circus of Broken Dolls’, a project that tells the sweet story of one trying to learn from the other through movement and music.