“I like fakeness and cheapness, and I’m interested in what we as artists can do when we put value on the tacky or the flimsy.”

We will present GREG WOHEAD´s show “Celebration, Florida” on March 13th and 14th. Artistic Director Günther Grosser spoke with the performer about his work and his inspirations.

With your work you focus, among other themes, on the edge of, or the difference between, the Real and its imitations or its copies as avatars or reenactments or surrogates, etc. Where does that fascination come from? 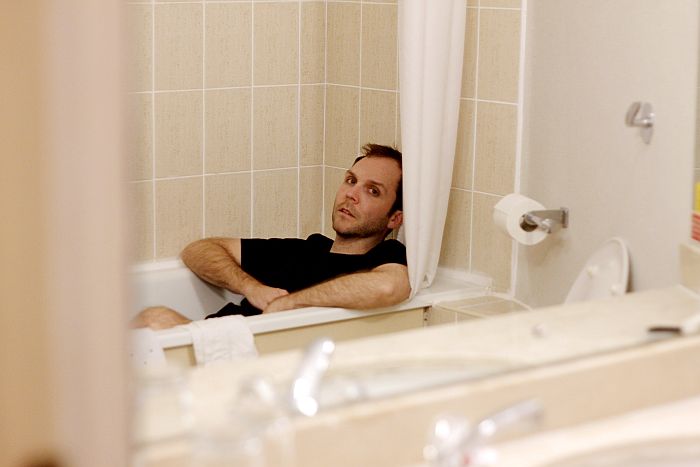 Yes, you’re right. This is a thread that runs through a lot of my work. My relationship with these things tends to shift as time develops, but it’s rooted in my interest in weirdness and that visceral feeling you get from experiencing something that’s not right, uncanny or off centre. In “The Ted Bundy Project” I imitate the serial killer Ted Bundy’s confession tapes, in “Comeback Special” I reenact elements of Elvis Presley’s 1968 Comeback Special, in “Celebration, Florida” I use two other performers to stand in for me so that I speak to the audience and perform actions essentially using the voices and bodies of others.

For me these ideas of imitations, stand-ins and reenactments are endlessly rich because they are always about a sense of space, movement and travel—the performance takes place in the relationship between the ‘original’ and the imitator, the stand-in or the reenactor so that it isn’t about one or the other, but it’s about both and also neither. That’s sort of an obtuse artspeak way to put it, but I think it means that the work is about opening up possibilities. 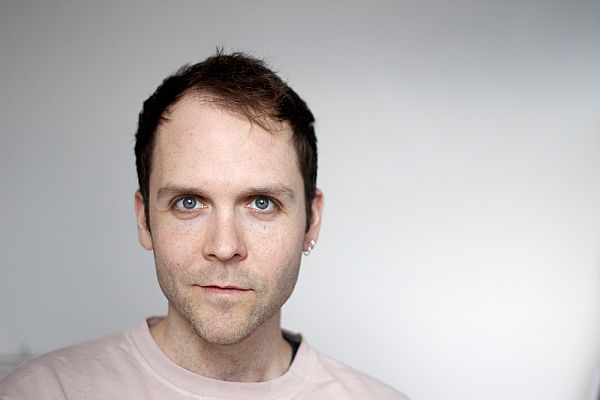 That opening up of possibilities, the sense of the weird and the off-centre, the sense of the work being about neither this nor that but also both—to me that comes down to reaching for a queer form. Not everyone would look at my work and recognize it as queer, but as a queer artist my positioning in the world is reflected in the forms and interests of my work, and that feels like where the ideas you mention come from.

It´s easy to dismiss places like Celebration, FLA as part of the disneyfying process of the world or as convincing examples for French philosopher Jean Baudrillard´s theory of simulation but there is something fascinating, even emotional to them as well – the fact that they are not part of a story in a novel or in a Hollywood movie but really out there. Was that an inspiration for the show? Or else?

Yes, this was absolutely an inspiration point for the show—Baudrillard’s ideas around simulation. I grew up in a suburb of Dallas, Texas surrounded by malls and chain restaurants. Where I grew up there weren’t that many places you could go that weren’t replicated in the exact same way across the country—and even the world. We would go out to eat at TGI Friday’s, grab a sandwich at Subway or go shopping for clothes at the GAP. There’s a weird sort of comfort that comes with these places. I remember when I had lived in London for only a few months—after I had moved there from Texas—I was visiting a friend in Barcelona (who had just moved there from Texas). Her wallet was stolen, which upset us both, and as strange as it might sound we then went and ate lunch at McDonald’s because it was somehow comforting and familiar to us.

You say it’s easy to dismiss places like this, and I think you’re right—it is easy for people to dismiss them as inauthentic or the hollow effects of capitalism, but I think that’s exactly why I—and others—find places like this so interesting. Places like planned communities and chain restaurants and interchangeable gas stations are parts of our modern existence that shape us and influence the way we think of ourselves and each other. And they can be an actual expression of where our society is and what its priorities are.

One of the main images of “Celebration, Florida” is a hotel room, which is an image inspired by Marc Augé’s idea of a non-place. It’s anywhere and nowhere, and it’s between destinations. Comfortable in one way, but in another way totally empty so that it can be lonely, but also a blank slate to fill however we want. Within the empty sameness of a hotel room you can be anyone. I’m interested in the simultaneous sense of comfort, fakeness and possibility these sorts of places offer. I like fakeness and cheapness, and I’m interested in what we as artists can do when we put value on the tacky or the flimsy. 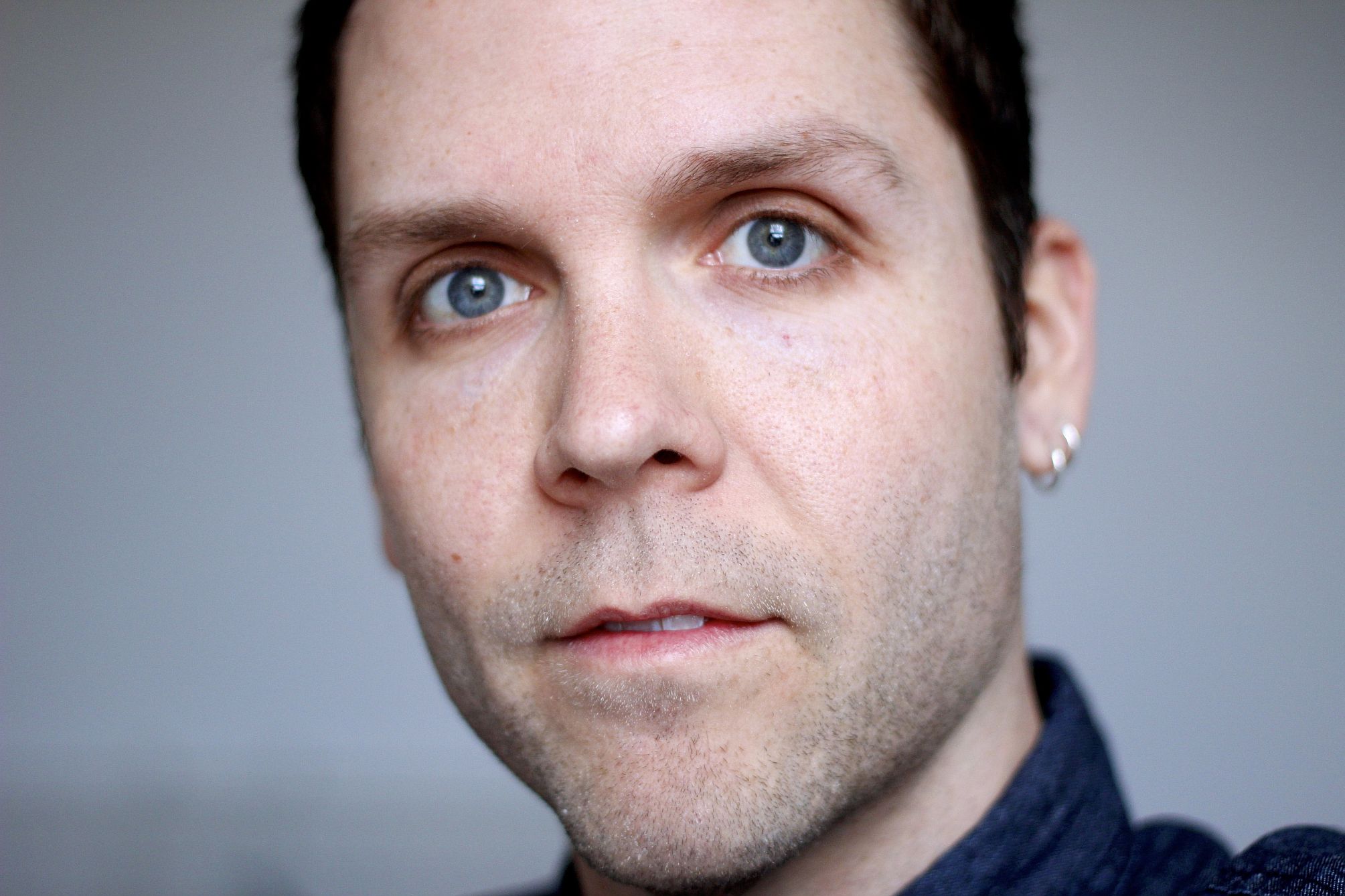 In “Comeback Special” you reenact a short bit of a famous Elvis Presley TV gig together with the audience. I was fascinated by the detailed and tireless work with selected audience members during the show that lead to a surprisingly different view on Presley´s equally detailed approach to his special comeback show. Why Elvis Presley?

For me it wasn’t so much Elvis as a whole persona or Elvis’ whole trajectory as it was about that particular moment in the story of the Elvis persona—the ’68 Comeback Special. It was an in-between moment for him. He wasn’t the new young figure he was in the 50s, but he wasn’t yet the slightly older Vegas Elvis of the 70s. He was in this in between moment of the comeback. I was interested in what it means to make a comeback and to re-emerge as a better, fuller more complete version of yourself.

The idea of reconstructing the moment you’re talking about was a process of maybe 15 minutes in the show where I repeat an innocuous 2-minute section of audio from the TV special and with each repetition teach different audience members a short active role in that section to reenact the 1968 audience. In addition to playing with the looping and repetition in the live rehearsal of that moment (there it is again with the imitation, stand-ins and reenactments), we finally get a meticulously rehearsed and constructed version of what originally felt like a natural off-the-cuff moment. For me that speaks to this tireless effort to reach for authentic identity when in the end, it’s all a constructed performance (not that that makes it any less ‘real’).

Your fascination with American serial killer Ted Bundy´s confessions lead to your show “The Ted Bundy Project” where you make the audience listen to Bundy´s recordings. How do people take that?

I had many different reactions to “The Ted Bundy Project” from audience members. The confession tapes themselves are never heard directly, but they are mediated by me in the performance. I listen to the tapes through headphones and mimic Bundy’s voice verbatim acting as a sort of medium. People were creeped out by that as I described details of a specific instance of murder, but the stronger reactions came from a moment in the show when I describe in detail a video you can find online that depicts one man killing another man and then dismembering his body. I talk through the video in an unemotional description, but the images that conjures in the mind are pretty graphic.

There are no actual images of gore in that show, only description, but I have had people faint, walk out and send me angry emails after the show. I have also had people come to see the show multiple times and tell me how much they loved it and how intrigued they were. That’s what the show is about really, this feeling if simultaneous attraction and repulsion. Why we’re both fascinated and disgusted by serial killers and all the gory details, and how we’re implicated in their popularity.

You moved to England from the US a few years back and became a vital member of London´s thriving performance scene. Was it easier for you to make work there or did you move for other reasons and how easy or difficult as an American was it to become a member of that scene?

I only ever started making my own work well after I moved to London 13 years ago, so I never tried to make work in the US. Because of that, I can’t truly speak to a comparison. My understanding is that there is some difficultly for independent artists making work outside the mainstream in the US because of different funding structures, but almost all my experience making work is in the UK.

I didn’t find it difficult as an American to feel a part of the UK performance scene. That scene certainly isn’t all made up of purely British people—my friends and peers there are from many different places, so I have never felt that the UK performance community is strictly ‘British’. In the beginning I would say in some ways it might have helped me to be American. I started out making work that was primarily autobiographical storytelling and I played on an image of those stories from my personal history feeling very American and nostalgic. People used to say it reminded them of a film. While my work has moved on from being straightforwardly autobiographical in that way, it certainly does still use very American personas and images—Ted Bundy, Elvis, the town of Celebration, Florida. A new work I am in the process of making stems from a conversation I had with an Amish couple in the US, who lived traditionally without electricity or any modern technology. So while in many ways I would actually call myself a British artist, I guess I can never escape my American-ness.

More about Greg Wohead and his work at his website HERE.