“When a Traveller tells a tale, they’re listened to.”

It’s 1946, rural Ireland. Josie Connors, a young Irish Traveller, sets up camp with her nomadic family on the edge of Ryan’s farm. When she crosses one of the deeply entrenched cultural lines between her Irish (ethnic minority) travelling community and the Irish (settled) community, we are catapulted through decades of unthinkable consequences. “Stuck between two worlds” in abject isolation and poverty, Josie keeps moving, presented with the most compelling reason of all to survive.

“It is hard not to be struck by the raw emotion generated by Mary Kelly and Noni Stapleton’s outstanding  work – Two for a Girl…. this is theatre stripped down to its basics and it works.” Sunday Business Post. Five Stars ***** 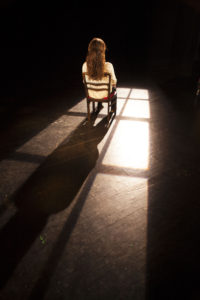 Two for a Girl is an homage to the intimacy and simplicity of traditional Irish theater, a style that can be as affecting on the back of a cart or the corner of a pub as it can on a formal stage. As Mary Kelly seamlessly embodies the five main characters, you will be drawn across generations and to every corner of Ireland in this unique look at identity, freedom and loss when two distinct Irish communities collide. This is a play about the transformative power and absolute necessity of being heard and bearing witness.

“A very moving piece that leaves you walking out of the theatre in a daze with the smell of a campfire in your nostrils.”  Doireann ni Choitir UTV.ie

In commemoration of the 100th anniversary of the 1916 Easter Rising in Dublin, ETB | IPAC continues its exploration of new Irish theater with Mary Kelly’s and Noni Stapleton’s Two for a Girl. The play is performed by Mary Kelly, a Berlin-based actor and playwright who is part of Berlin’s burgeoning international Freie Szene.

MARY KELLY is an actor and playwright. She graduated from the Gaiety School of Acting, Dublin, in 2002. Five of her plays have been produced, two of which are published: Unravelling the Ribbon and Two for a Girl. Unravelling the Ribbon toured Ireland in 2008, and had its U.S. premiere in 2010 with the Tennessee Women’s Theater Project. It has recently been translated into French. Since moving to Berlin, Mary was commissioned and has written The Scarlet Web for Big-Telly Theatre Company, Northern Ireland.

Two for a Girl is published by The Stinging Fly Press, Dublin.