The exhibition and performance project Terrain of Threshold Voices is dedicated to forms of artistic research on language in relation to the transformation of the urban landscape though migratory movements. Inspired by the presence of written expressions (such as advertisements, posters, graffiti, t-shirts, etc) – which take the contemporary city as a textual surface – language phenomena are explored as terrains of friction between different communities.

It connects the ongoing investigation on dissident practices of precarious bodies within the framework of District’s dissident desire with the histories and present narratives of migration in Berlin that are examined by Aliens of Extraordinary Abilities? at English Theatre Berlin. Engaging with the interstices of different languages and cultures of space, Terrain of Threshold Voices manifests in an exhibition as a performative zone of conflict. Moving beyond normative attribution and cultural representation, the exhibition opens a language laboratory of threshold jargons that emerge from transitional states.

The project combines this experimental approach with performative movements throughout the district of Tempelhof-Schöneberg surrounding District Kunst- und Kulturförderung. The site-specific performances by Hanne Lippard and Wilhelm Klotzek take this microcosm as their field of exploration and action. Both the exhibition and the performances in the neighborhoods map out terrains, structures and movements which emerge at intersections and ruptures between different social narratives of Berlin. 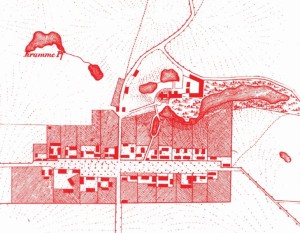 For Terrain of Threshold Voices, Anna Bromley will update her artistic work investigating forms of political expression within the scope of recent protest movement with an eye towards Berlin. In her installation, a karaoke version of protest speeches, the visitors can lend their voices to various political speeches. On November 10, her radio feature A City After Our Heart‘s Desire presented the urban resistance and “their” Berlin. The exhibition also includes Larissa Fassler with new work exploring Berlin’s Schlossplatz (2013), Jaume Ferrete with the video documentation of a choral performance as well as work by Constant and Nasan Tur.

Performance Tours Through the Kiez

The phone-persona is delightfully visually shrouded, only surrounding sounds can give your lies away. There are no waterfalls in the city. Prior to our cellphone lives, a phone call had a given time and space, it was an agreement between two distant parts. In a culture depending on a phone to serve as a multi-tasking nomadic gizmo, Hanne Lippard’s call-shop tour is an exploration into the specificity of the phone-call as a fixed act in time as well as location.

November 23, 3pm – Meeting point: District Kunst- und Kulturförderung. Please sign up for the tour by November 21 by sending an email to post@district-berlin.de

December 7, 4:30pm – Meeting point: District Kunst- und Kulturförderung. Please sign up for the tour by December 5 by sending an email to post@district-berlin.de

In his performance Stätte – Stimme am Subjekt, Wilhelm Klotzek connects the location of the Gaststätte (restaurant or public house) with garden colony politics and hardware store cosmoses through bold language sculptures. In the middle of the garden colonies surrouding the Priesterweg S-Bahn station , set off on a daring tour of ideas through territories of growth, construction and do-it-yourselfing. For a short time, you will be part of a movement you didn’t even know existed until now: weclome to the “multitool” club.

November 30, 3pm – Meeting point: SÜDEN Gartenlokal inside the Priesterweg S-Bahn station. Please sign up for the tour by November 28 by sending an email to post@district-berlin.de

December 7, 3pm – Meeting point: Restaurant ZUR ZIEGENWEIDE, opposite the Priesterweg S-Bahn station. Please sign up for the tour by December 5 by sending an email to post@district-berlin.de

The exhibition will be opened by the Belgian collective Constant and a presentation of their long-term project La langue Schaerbeekoise (2010-2013) exploring the further development and renewal of language through various cultural influences.

Building upon the basis of Valentina Karga’s socio-artistic engagement in the gardens near District and primarily upon its failure, she and Pieterjan Grandry will publish a Reader that includes a selection of text, quotes and references on the topic of the project as well as the individual contributions to the exhibition and can be purchased.

The editor in chief of the independent publisher BROKEN DIMANCHE PRESS, John Holten, invites artists, writers and performers to participate in Dime Bumshow. Slang, dialects and local expression will be investigated as literary phenomena within the framework of readings.

Toledo Art Forms is the art platform through which Camille de Toledo writes and creates. From photography to fiction writing to theory to art installation, his work is endlessly designing a space in-between genres, identities and languages. In this performed conference, he will give us a hint of why Zwischenheit is the other name for his 21st century art and politics.

Berlin-based artist Nasan Tur presents his exploration of international urban spaces for all kinds of graffiti and street poetry in his City says series. He develops various translations such as performances, videos or posters from the text material that connect current political realities with local everyday sayings and subculture expressions. At District, he will present his work Istanbul Says in a lecture and discussion.

Touristen fisten ist auch keine Lösung. Out of principle: I don’t want to have sex with people who consume the city I live in like it’s a picture on a postcard. The tourist is the perfect consumer. The city transforms itself into an amusement park for them. Inhabitants of the city are pieces of decoration or service personnel. In touristy Berlin, Guy Debord’s famous “society of spectacle” has long since become reality.

Peter Laudenbach is a theater critic for the Süddeutsche Zeitung and a theater editor for the city magazine tip. Most of all, however, he enjoys his work for the business magazine brand eins. He has written a  good-humored aggressive book about tourism in Berlin: Die elfte Plage, published by Edition Tiamat.

This project is funded by the Hauptstadtkulturfonds (Capital Cultural Fund).