‹The 2015 Expat Expo: A Showcase of Wahlberliner‹ Next production
BERLIN INTERNATIONAL YOUTH THEATRE: Into the Haystack›Previous production ›

The very first presentation of a new work-in-progress by Andrea Stolowitz, our 2015 Playwright-in-Residence, followed by a post-performance discussion.

In 1936 Dr. Max Cohnreich escapes Berlin, Germany and arrives in NYC settling there with his immediate family. In 1939 he writes about his experiences in a diary. In 2013 his great-granddaughter finds the diary at the archives at the U.S. Holocaust Memorial Museum. In 2015 she travels to Berlin to find clues about the life he describes and the people she never knew. The parallel lives of the characters create a narrative about the search for home and family which operates at the border of reality and memory and the intersection of national history and private lives. 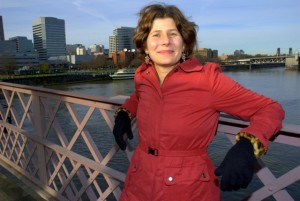 Andrea Stolowitz’s plays have been presented at The Cherry Lane (NYC), The Old Globe (SD), The Long Wharf (CT), New York Stage and Film (NY), and Portland Center Stage (OR). The LA Times calls her work “heartbreaking” and the Orange County Register characterizes her approach as a “brave refusal to sugarcoat…issues and tough decisions.”

Andrea is a founding member of the playwrights collective Playwrights West (www.playwrightswest.org) and works as a collaborating writer with the award-winning devised theater company Hand2Mouth Theater (http://www.hand2mouththeatre.org).