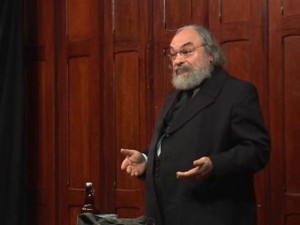 Howard Zinn’s Marx in Soho portrays the return of Marx. Embedded in some secular afterlife where intellectuals, artists, and radicals are sent, Marx is given permission by those in charge to return to Soho London to have his say. But through a bureaucratic mix–up, he winds up in SOHO in New York. Marx returns to clear his name but in doing so he gives the audience glimpses of Karl Marx seldom talked about; Marx the immigrant, Marx the father, Marx the husband, Marx the Man. With captivating wit he shares tales from his life with his wife, daughters, friends and enemies.

Howard Zinn’s Marx alone occupies the stage. “Marx has different voices. The actor has to show Marx’s outrage at social injustice, express the pedantic Marx, the vindictive Marx, Marx, the loving family man, Marx as Humorists, and a Marx that can laugh at his enemies”

with three additional performances until July 11, 2009

with Jerry Levy as Karl Marx