THE U.S. EMBASSY LITERATURE SERIES:
Joshua Hammer reads from The Bad-Ass Librarians of Timbuktu and Their Race to Save the World’s Most Precious Manuscripts (2016) 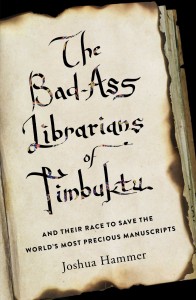 To save precious centuries-old Arabic texts from Al Qaeda, a band of librarians in Timbuktu pulls off a brazen heist worthy of Ocean’s Eleven. In the 1980s, a young adventurer and collector for a government library, Abdel Kader Haidara, journeyed across the Sahara Desert and along the Niger River, tracking down and salvaging tens of thousands of ancient Islamic and secular manuscripts that had fallen into obscurity.

The Bad-Ass Librarians of Timbuktu tells the incredible story of how Haidara, a mild-mannered archivist and historian from the legendary city of Timbuktu, later became one of the world’s greatest and most brazen smugglers. In 2012, thousands of Al Qaeda militants from northwest Africa seized control of most of Mali, including Timbuktu. They imposed Sharia law, chopped off the hands of accused thieves, stoned to death unmarried couples, and threatened to destroy the great manuscripts. As the militants tightened their control over Timbuktu, Haidara organized a dangerous operation to sneak all 350,000 volumes out of the city to the safety of southern Mali.

Joshua Hammer joined the staff of Newsweek as a business and media writer in 1988, and served as a bureau chief and correspondent-at-large on five continents between 1992 and 2006. Hammer is now a contributing editor to Smithsonian and Outside, a frequent contributor to the New York Review of Books, and has written for publications including the New Yorker, the New York Times Magazine, Vanity Fair, the Condé Nast Traveler, the Atlantic Monthly, and the Atavist. Joshua Hammer has been awarded the National Magazine Award 2016 in the category “reporting.”

Tickets € 8 / school groups free if they register with IRCBerlin@state.gov