“Say Yes!” is the motto of IMPRO 2014, the biggest festival for improvisational theatre in Europe. 40 artists from 14 nations present entertaining, contemplative, dramatic, hilarious moments, celebrating the spontaneous theatre in 28 shows: whipped impromptu on stage before the audience’s face.

At the beginning of the festival, we present the prelude race through the world of film. You ask for a horror film, a spaghetti western, soap operas or documentaries, Ancient Rome epics or “Berlin School” – the international cast tries to fulfill every wish. Great cinema on the theatre stage — a trip on the roller coaster of cinematic pleasure.

It is always a special show when spoken neither in German nor in English, but in French. For the first time the ensemble Impro Infini is our guest, who in turn host their own festival (Subito) in the city of Brest, with whom we are cooperating. Both French colleagues meet Kevin (Dad’s Garage/Atlanta) and Lucien Bourjeily (Impro Beirut). The four of them will not only be inspired by the charming suggestions of the audience, but also by the special lighting mood and sound effects – o la la.

The sound of a city has a very special tone. This night is all about funny and tragic moments in daily life of a big city. Special about the show is that the inspirations intensified(?) come from those, whose part for the success of an improv-night is mostly underestimated: the musicians – in this case Hannu Risku (Stella Polaris/Finnland), Gilly Alfeo (Die Springmäuse/Bonn) and Rudy Redl (Die Gorillas) – will inspire the actors with their instruments and soundfiles and will push them to the peak.

Two years ago we tried this for the first time, and beautifully enough a lot went wrong: cell phone cameras were streaming improvised events into the theatre (which most of the times worked out, but got stuck sometimes) where the thread was continued until the next switch to the outside crew, and so on. Those in the mood for an improvised adventure and touching moments (one of the most impressive moments developed when things went wrong, and the actors did not know they were filmed) are in the right show. We work in cooperation with the great nerds of ape unit and attempt the improvement of this format.

The main focus of the festival. After we gave ourselves over to various playwrights in 2011, this year’s focus lies on the improvisational transformation/conversion of two directors (R.W. Fassbinder und Quentin Tarantino) and two genres (“Romantic Comedy” and “Fantasy”). The festival ensemble rehearses these special improv formats in two-day workshops each and improvises them on two nights. In English Theatre, we will present to you two movies in the style of the genre Fantasy and the director Tarantino – but not without having asked the audience for their associations and suggestions of course!

Book your tickets for all shows directly at the festival homepage ! 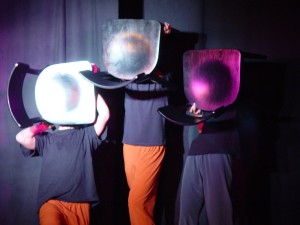