‹The Goat, or Who is Sylvia?‹ Next production
Dirt›Previous production › 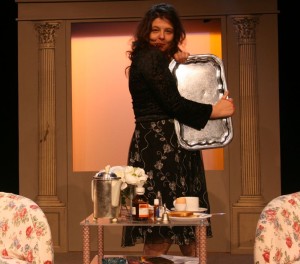 Julia and Jane, the fallen angels, are youngish married women, best friends, bored with their husbands and eager to reclaim their lost youth in the shape of a young Frenchman – with very little knowledge of English but considerable skills in the wooing department! – who had an affair with both of them before marriage. He sends a postcard to both women saying he is coming to London. They work themselves up into a drunken state of excitement in anticipation of their long-lost lover’s return…

Fallen Angels is one of Coward’s earliest plays: written in 1923, premiered in 1925, revived in 1949 and produced in America in 1955. In 1958 Coward returned to the play, re-writing and updating the set to 1934. The play’s scenario was, according to some reports, based on a real life episode when Coward and Gladys Calthrop were both dressed up waiting for a mutual boyfriend to arrive. (It is knowledge that Coward was homosexual). 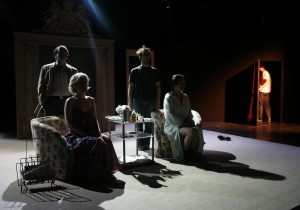 The play was nearly refused its licence as “brightly written, but extremely dubious” and because “the women’s obvious willingness to go wrong, and about their pre-nuptial going wrong, would cause too great a scandal”. But the Lord Chamberlain, official censor of theatrical performances, passed it, with only a few dialogue changes, because he saw it as “so much unreal farcical comedy” – but nevertheless, Fallen Angels caused a lot of moral outrage when it was premiered in 1925.

Klaus Chatten studied acting at the Max Reinhardt-Seminar in Vienna and at the Actor´s Studio in New York. He worked as an actor at Maxim-Gorki-Theater, Theater am Kudamm, Schiller Theater, a. o. Since 1992 he has directed numerous productions for Freie Volksbühne, Kampnagelfabrik Hamburg, a. o. He wrote the script for Dani Levy’s 1996 movie Stille Nacht? Ein Fest der Liebe. His own plays include Klassentreffen and Sugar Dollies which opened 1996 at the Gate Theatre, London. Chatten has translated nine of Coward´s plays for gallissas publishing company.