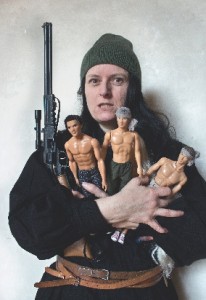 One of Germany’s most popular plays by one of Germany’s most popular authors, Friedrich Schiller – Radical and provocative at the time of its premiere in 1782, Bridge Markland presents it as a fast-speed One-Woman plus Puppets-Lip-Sync-Show with sexy Ken dolls as robbers and an original East German nutcracker.
Rebellion, envy, love, stubborness, hero-worship and desperation! Markland reinforces Schiller’s strong language with more then 150 songs, including many film themes ranging from Wagner´s Ride of the Valkyries to Lady Gaga, from Ennio Morricone to the theme from Dallas, Rammstein and a lot more great music.

Schiller’s translated text is spoken by actors from Berlin’s English-language theatre community like Peter Scollin from Playtpus Theater as the Old Moor, or Jeffrey Mittleman as Spiegelberg, and many others.

English-language premiere of robbers in the box: January 24th 2013 at English Theatre Berlin