‹Berlin Was Yesterday: Expatriate Traffic from the Kaiser to Kotti‹ Next production
Our Hands›Previous production › 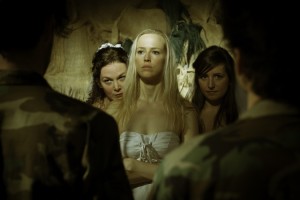 Charles L. Mee´s Big Love is based on a play written 2500 years ago:  The Suppliant Women by Aeschylos, in which he investigates the consequences of a mass of women fleeing from their impending forced marriages and their treatment in the land in which they seek shelter. Today, in Big Love, they gain and then lose asylum in their new country, face death from their own people if they refuse to return, and must constantly fight to have their voices heard. Defiant to the last, they commit themselves to a terrible pact in order to win freedom at any cost.

So we ask ourselves: Twenty five centuries later, and what has changed? What is our modern reaction to mass immigration, even when accompanied by stories of atrocity and oppression? What do we do, when a group arrives en masse, claiming political asylum, and our response to their pleas could jeopardise our own national security? In order to regard ourselves as “civilised”, how far are we required to go, to defend the oppressed people of another nation against the “injustices” of their own culture? Are our values somehow inherently “better” than theirs? And even if they are, when do we get involved and when not? Kosovo, Rwanda, Libya, Syria, Gaza… these narratives are frighteningly familiar to a modern audience, lacking any certain compass for moral guidance.

Since its inception in 2009, Actors Space Berlin has become a mecca for actors from all over the world, who are committed to truthful, thoroughly engaged performance and creating a powerful, moment-to-moment, living experience for their audience. Actors-Space Berlin gives artists a sense of community in which they can explore and develop their craft, and supports the development and presentation of new and provocative work. “Push Comes to Shove” is a grass-roots, English-speaking ensemble, born out of this soil, comprising German as well as ex-patriot actors and artists. Incorporating all the available disciplines to aid in the telling of the story, the company here works collaboratively with choreographers, with sound, costume and set designers and with installation artists, in order to create a comprehensive, interdisciplinary story telling. André Bolouri, founder of the Ensemble and director of the play, commented on the artistic process saying, “It’s about challenging traditions, forms, and boundaries. Each artist brings their own talents to the team to organically build the piece.”

“True love has no conditions. That’s why it’s so awful to fall in love.”