Last night Brokentalker’s production – ‘I Have No Mouth’  ended with hundreds of balloons being released over the audience, this was also the ending of the festival. In the production it symbolised a lightness, a healing of sorts,  a sense of coming out the other side of a question, a time to play and hope. It was a beautiful ending to a powerful production and a fitting ending to the closing of the festival. The audience played with the balloons, sending them all directions, the performers did too.

Having performed twice this week with two different casts and directors, having seen almost everything the festival has to offer and having written about it along the way, it is likely that I’d have another Jameson hangover and be a tad tired today.

Work from Beckett, Roddy Doyle, Brokentalkers, Gary Duggan, The Company, Rachel West, Ciara Goss,  Claudia Schwartz, Shauna Tohill, Carmel Winters, Daniel Brunet, Günther Grosser, Chang Nai Wen, Conor Lovett, Judy Hegarty Lovett, John Smith and many many more. The many more include actors, technicians, front and back of house staff and volunteers. And then there is the audience. They came in big numbers with open minds and generous clapping durations. The atmosphere all week was warm and open and excited. The shows posed grim and challenging questions, had audiences choking on laughter, angered some, softened others, there were lengthy conversations and about ‘why, how and who?’  afterwards over drinks outside on balmy Berlin nights.

There is no hangover, no tiredness, in fact the opposite. A discussion has begun, there is a lightness, maybe even a healing of sorts,  a sense of coming out the other side of a question, perhaps even a time to play and hope.

Audiences and performers will play with balloons together again after hard questions and live truths.

Günther Grosser of English Theatre Berlin brought the first ever Irish Theatre Festival to Berlin. It was a  success.

It’s the last day of the festival already. The rehearsed reading of SHIBARI went really well last night. The cast all round were great. Very well chosen for each of the parts, I could easily imagine them working in a full production. It’s always exciting (and a little dauntíng) to experience a new cast working with a script that I’m so familiar with being performed by the cast that originated the play. Sometimes it’s only when a new cast play the roles that I fully realise what qualities and strengths the play has. Does the humour and emotion transfer from one set of performers to another? Is it extremely different or very similar with the new cast?

The director Rachel West did a great job and I enjoyed that she made a bold decision in creating a visual representation of the theme of the play which grew throughout the reading. Each of the actors had a ball of string that they unravelled and tied as they moved position for each new scene (the play is a series of two-hander ‘meetings’ where there is a different couple every time). As the reading progressed the patterns left by the string became more elaborate and left the connections between each character hanging in the air, the actors had to delicately navigate theír way through the maze of contacts. It was an extra layer of challenge for the performers but they were more than up for the task and the final Image beautifully highlighted all the references in the text to entanglements and patterns of contact that exist in a city the size of Dublin. 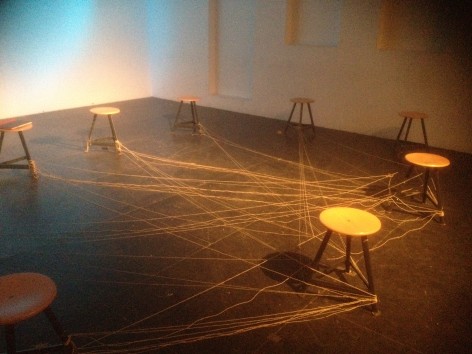 It’s been fantastic to be a part of THE FULL IRISH and it feels as though it has been a great success for English Theatre Berlin. There’s two more chances to get a last bite of the festival tonight, Brokentalkers have their final performance of HAVE I NO MOUTH and there’s a reading Enda Walsh’s excellent play PENELOPE. Get in if you can…

I’ve really enjoyed my time here in Berlin, discovering a lot more of the city than when I was briefly here years ago. I’ve made some new friends that I will certainly keep in contact with and I’m very much inspired to come back here sooner than later and hopefull bring more of my work again in the future.

Now, I’m off to be a full on tourist for the next day or so, tschüss!