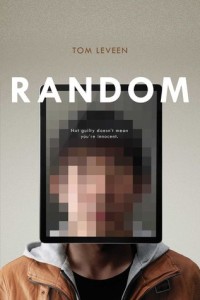 Who’s the real victim here? A tense and gripping exploration of cyberbullying and teen suicide.

Late at night Tori receives a random phone call. It’s a wrong number. But the caller seems to want to talk, so she stays on the line. He asks for a single thing—one reason not to kill himself.

The request plunges her into confusion. Because if this random caller actually does what he plans, he’ll be the second person connected to Tori to take his own life. And the first just might land her in jail. After her Facebook page became Exhibit A in a tragic national news story about cyberbullying, Tori can’t help but suspect the caller is a fraud. But what if he’s not? Her words alone may hold the power of life or death.

With the clock ticking, Tori has little time to save a stranger—and maybe redeem herself—leading to a startling conclusion that changes everything.

Tom Leveen is the author of Random, Sick, manicpixiedreamgirl, Party, and Zero (a YALSA Best Book of 2013). A frequent speaker at schools and conferences, Tom was previously the artistic director and co-founder of an all-ages, non-profit visual and performing venue in Scottsdale, Arizona. He is an Arizona native, where he lives with his wife and young son.

* School groups are free if the register with IRCBerlin@state.gov

In cooperation with Hanser Verlag München and Thalia Buchhandlungen