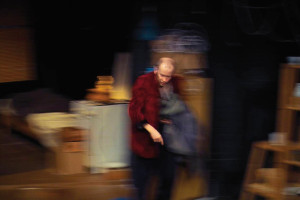 English Theatre Berlin premiered its production of Harold Pinter´s masterpiece in May 2005 in its old space. Five months later Pinter was awarded the Nobel Prize for Literature 2006 and English Theater Berlin was about to move into new quarters –

– reasons enough for us to bring back the prodcution in the new space (not quite finished, to be honest, more of a transitional solution but all the more perfect for The Caretaker).

This is about political manoeuvering, fraternal love and language as negotiating weapon or a form of cover-up – a typically nasty “pinteresque” comedy with a seemingly simple arrangement: two brothers and a mysterious stranger meet up in a room. Their tactics of survival: 1. Find the right partner; 2. Talk talk talk; 3. Emotional intelligence might be helpful but sometimes a knife comes in handy. And never underestimate family ties….

with nine more performances until February 18 2007