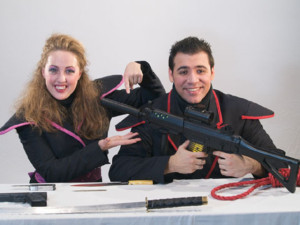 Imagine an overpopulated world, the Earth is bucking under the strain of our consumption. But not to worry; the government has come up with the ultimate solution.

Once a month, if your social security number is called, you have a choice: you can either report to be killed or apply to kill someone in place of you. It’s not difficult, really, with the over supply of super humane weapons available to you on every corner!

Norah Proud’s number has been called. In the short time that follows, she begins having prophetic dreams which point to a flaw in the system, gross manipulations and distortions by a ridiculous media, and she starts digging around in dangerous places to find any element of truth to her dreams. Grace, her partner, watches on in frustration as Norah pays more attention to the prophecies than finding a replacement for this month’s killing spree. Georgina, the head of the powerful Ministry for Humane Extermination, starts a desperate search for the one who is destined to expose the entire system – and stop her at all costs.

In this multi-media piece, three women and a medley of absurd television and radio propaganda tell the tale of survival and decay in this society. Their combined story is a darkly humorous one of distorted media, power-hungry officials and the mass manufacturing of very, very humane weapons.

Born in Doylestown, Pennsylvania, Ashley Brandt studied German Literature and creative writing at Brandeis University, where she wrote and directed her first play. Since arriving in Berlin, she has been very active in the theater scene as a playwright and director. Her Berlin debut, Twenty-Two Faces of Sanity, was presented at the English Theatre Berlin in February 2007, followed by The Harvest Chamber, which enjoyed three runs of performances at Humboldt University and English Theatre Berlin in 2007 and 2008. Alongside playwriting, Brandt has acted as curator of the LAB at English Theatre Berlin, and is the author of numerous short stories.

with  nine additional performances until May 16, 2009

scenography by Will McNeice