The project focuses on the processes of urban development using the Back to the Future movie trilogy as its point of departure.

In Back to the Future, Part II, the teenager Marty McFly travels to the future in a souped-up sports car and lands in 2015. There not only does Marty encounter holograms, hoverboards and his thirty-year older self; the city of Hill Valley is also wholly transformed.

First come the artists and studios, followed by the students and the cupcake cafés and then the well-to-do and boutiques. And this process takes place over increasingly shorter periods of time.

copy & waste intends to open a fictional store, a concept store: Ruckzuck – Cupcakes & Time Travel. Here customers can enjoy cupcakes and cappuccino in a Back to the Future ambiance – during the day. At night, the store also offers time travel. Like Marty McFly, the visitors can travel to the past or dash to the future to prevent certain things from happening – or from not happening.

The basic question in all of this is: what kind of city do we want to live in? 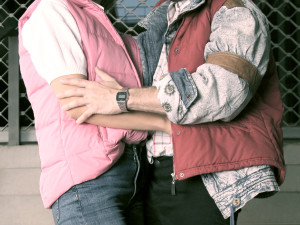 Featuring a post-performance discussion on Friday, September 4 as part of Theater Scoutings Berlin!

The project Knick-Knack to the Future | Ruckzuck in die Zukunft is a co-production of the art collective copy & waste and English Theatre Berlin | International Performing Arts Center. This project is funded by Regierenden Bürgermeister von Berlin – Senatskanzlei – Kulturelle Angelegenheiten and by the Konzeptionsförderung of Fonds Darstellende Künste e.V. – aus Mitteln des Bundes as well as the festival steirischer herbst Graz and Ringlokschuppen Ruhr.