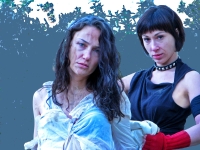 On House arrest in her own home, once magnificent but now ravaged by a mysterious change whose the destructive impact continues to be felt, the Countess Strassa is now subject to the authority of those who, until recently, were her servants. We will never know the exact nature of the event which has produced such a change; at best can we measure the effects. The question posed by the new situation is not about the reversal of power relations – it‟s already done – but of exceeding them, that is to say the appropriation of the other, body of the other, that Howard Barker defines in bluntly erotic terms: what is required of Strassa is that she consents to be owned by the husband of her former maid. Abject perspective in the physical absence of the husband that makes the two women create a strange relationship of antipathy, rivalry, but also unexpected complicity, and gives rise to a tense dialogue, powerful, sharp as a razor, which opened excavation at the heart of the human and uncovers what makes it beat: desire, frustration, thirst for dignity.

“I’ve always been attracted by the plays of Howard Barker. His more abstract world, more dreamlike than his English contemporaries, fascinates me. His baroque side also, that exceeds the narrow confines of our time. Natasha’s proposal was an opportunity to move to act: to finally stage a piece of him with a couple of excellent actresses. And the choice has logically focused on “deep spouses, shallow animals” For it concerns two women here. In a climate of an upheaval. A Coup. Two women in a time when power relations are reversed. Where the one which reigned will eat dust. And the one that was invisible will be able to shine in the light. Where the one who had everything, now doesn‟t have anything and the one who had nothing, now possesses all thing. Two women in a permanent relationship of domination and submission which reminds of “The Maids” by Jean Genet. But if the Barker play is inspired by it, that is just to better project it in the heart of the preoccupations of our time, playing continuously on the fear of a world that is on the road to ruin and on the need for real and concrete links (even violent) in a more and more virtual world: as in a video game where one chooses his clothes, the color of his hair, his car, his house…Here it‟s about choosing the manner in which one of the two women will be raped. Under the pretext of power inversion (the mistress becomes the slave of her servant) the two women are playing themselves a dangerous game that keeps their senses awake even if a priori, all is dead around them. Apart from this mechanical dog, ersatz of Japanese robots that is constantly coming to collect its share of the spoils: a piece of the dress of the mistress being more and more laid bare. Because what remains of power without the attributes of power? And even further in this game of reversed mirror: what remains of desire without the attributes of power? In this dance where you never really know who leads the game, it is an entire pursuit of desire which is unfolding before our eyes, combining abandonment and revolt of bodies subject to the tyranny of the learned thought.”    Patrick Verschueren