‹to die for‹ Next production
Colorblind?›Previous production ›

Two fucked up individuals are washed up in a run down bar in the Bronx: Truck-driving, short-tempered Danny, whom they call “the beast” encounters Roberta – mother of a moronic son, fearless and constantly seeking for punishment. A perilous cocktail of dangerous closeness, violence, emotion and audacity clashes in John Patrick Shanley’s fierce and heartbreakingly funny comedy – with an outcome you’d never guess in your wildest dreams. 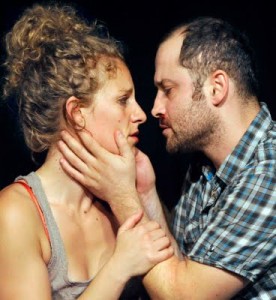 John Patrick Shanley – American playwright, screenwright and director, won the Academy Award for his screenplay Moonstruck (1987). 2004 he was eternalized on the Bronx Walk of Fame. His play Doubt: A Parable won the Pulitzer Prize for Theatre in 2005, the Drama Desk Award as well as the Tony Award for Best Play. In 2008 the play was made into a feature film, starring Meryl Streep, Philip Seymour Hofmann and Amy Adams; Shanley directed it himself. He directs his plays himself as well whenever he can.

Andreas Schmidt – actor and director, had theatre engagements as an actor in Mannheim, Dortmund, Bonn and Berlin. After two nominations for the German Film Prize in 2003 and 2006, he eventuelly won it in 2009 in the category “Best Male Supporting Actor” for Helmut Christian Görlitz’ movie Fleisch ist mein Gemüse. Apart from his work as an actor for TV and film, Andreas Schmidt also works as theatre director in Berlin. Among others, he staged the very successful Shakespeares sämtliche Werke for the Vagantenbühne Berlin which has now been running for almots 15 years. In addition to that, he staged plays for Theater am Kurfürstendamm

with five additional performances until Oct 27, 2012