a cover version of the greatest comedy ever

Katherine and Audrey rent out a garden apartment. Only to artists, though. This has earned them a very impressive art collection. They love art, galleries, openings. Their brother, who thinks he’s Erich Honecker, will probably have to go to an institution because he won’t leave his room anymore. He will be greatly missed, because he buries the corpses in the cellar when his sisters have poisoned another one of those sad characters – There is nothing sadder than failed artists. 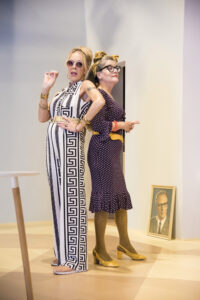 Katherine: “It was so sad to see a young artist die. And then we came to the conclusion that there really is nothing sadder in this world than an artist who suffers from a lack of success, who goes nowhere with all their ambitions but down the drain”

Audrey: “And we thought it would be better they didn´t have to live through all that pain and misunderstanding and pain again. So we helped them.”

Then her nephew Max shows up with Dr. Graveline. They are on the run and have the body from their last murder with them in the trunk. The burial ground in the basement comes in handy. Things get complicated ….

Cool Aid is a lurid farce about the dangerous edges of the contemporary art business, where the abyss is always lurking and only those who “make it” are immune from the crash.

Audrey: A bunch of fucking wankers. 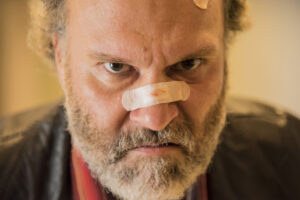 Cool Aid is a contemporary cover version of the best of all comedies, Arsenic and Old Lace from 1941.