Is it love? Is it weakness? Hope or desperation? Why do we do it? Again and again.

In this interactive show, one woman finds herself on the brink of love, lust, fear and hope. YOU, the audience, are her dates. YOU decide how her story unfolds. 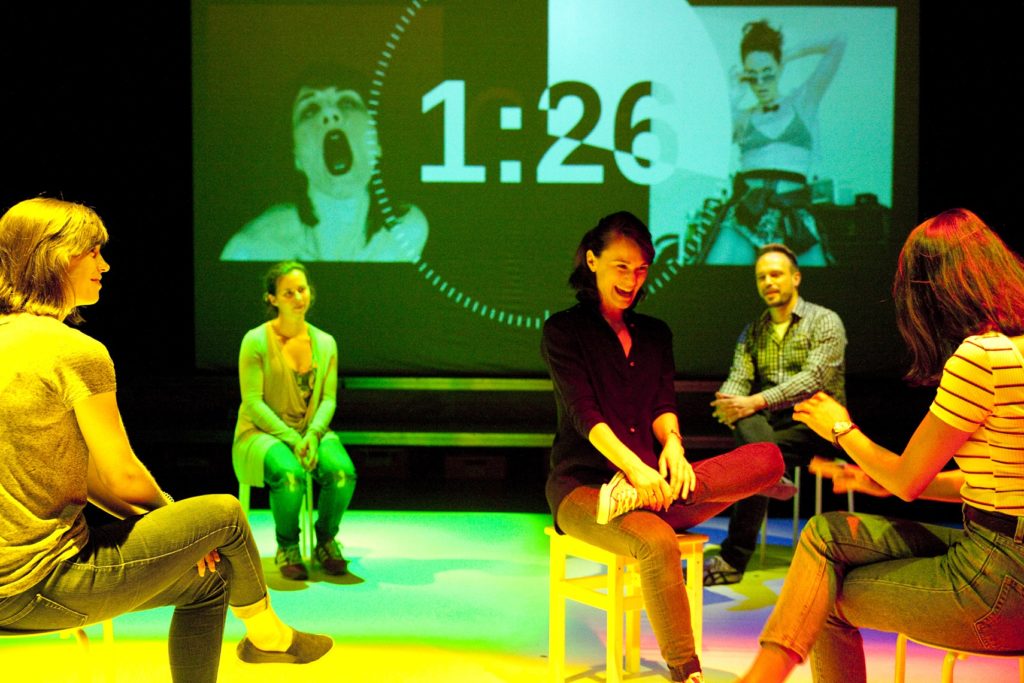 #Instalove is a joyful, electrifying, and at times stormy celebration of all the reasons we seek love – from the playful to the pathetic, the pragmatic to the passionate. It transposes the quest for love into a live competitive game, in which Catherine competes with herself – her many selves – for the audience’s affections. The audience are her co-players and vote for a winner, so every night is different.

Laugh, sigh, dance, and cry. Expect to make one hot mess. Together, you and Catherine will explore the modern search for timeless romance.

After presenting Catherine’s performance Celebrity Bound first as part of the 2014 Expat Expo | Immigrant Invasion Festival and then in two separate additional runs, we are thrilled to bring back our production of the world premiere of #Instalove freshly from a 20-performances run at the Edinburgh Festival Fringe!!

Special thanks to Lovoo for their support! There will be a post-performance event in conjunction with Lovoo on  October 26 exploring the topics of “Love in the Digital Age – Insights by LOVOO and an External Research Project” and Love is Risky vs. Love is Predictable in the Era of Dating Apps”.

There will also be a post-performance discussion in conjunction with Theater Scoutings Berlin on October 27!

Based in Berlin, her work has been supported by MOMENTUM Gallery, Camden People’s Theatre, Battersea Arts Centre, theSpaceUK, TRAFO Center for Contemporary Art in Poland, a Fulbright Fellowship in Spain, the International Festival of the Delphic Games in Greece, the Boulder Museum of Contemporary Art in Denver, Colorado, and the Subterranean Art House in Berkeley, California.

Ruth’s projects have been supported by the Jerome Foundation, New York State Council on the Arts, Experimental Television Center, Lower Manhattan Cultural Council and the 21st Century ILGWU Heritage Fund. Ruth was the Resident Researcher in Video at New York University’s Interactive Telecommunications Program (ITP) where she received her Master’s degree and a fellow in Public Humanities at Brown University. Additional residencies include Yaddo, Squeaky Wheel, CESTA (Czech Republic), Digital Performance Institute, and Here Arts Center. Her work has been widely covered in the press including the New York Times, NY Daily News, NPR, CNN, and the Huffington Post.